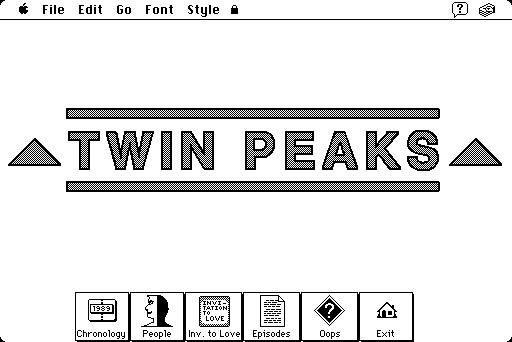 Reviewer: mjm2nu - favoritefavoritefavoritefavoritefavorite - April 28, 2020
Subject: Twin Peaks Review
The title of this HyperCard stack is called “Twin Peaks” and was written by Mark Lewis on April 13, 1994. This stack is intended for users who have watched Twin Peaks, specifically the first season. However, it can also educate users who have never seen the show and give them more information about the show. The purpose of this stack is to function as a guide through the first eight episodes and help the user understand what it going on. The stack details the events that occur in order, character descriptions, and overall give a summary of the first 8 episodes. In addition, the stack includes errors that were made during the production of the show. The stack includes an “oops” section where it details these discrepancies and errors. Personally, I think this stack is helpful to fans who watch the show and want clarification, and can also be useful for people who are new to the show and want more information about the episodes. I would recommend this stack to other users because it is easy to navigate since it has a main page with the different options at the bottom and back arrows from each of those pages. It is very helpful if you are looking for more information or clarification on the first eight episodes.
Reviewer: Collette Block - favoritefavoritefavoritefavoritefavorite - November 7, 2018
Subject: "Twin Peaks" Super Fans and Beginners Must Read!
The “Twin Peaks” HyperCard Stack, created by Mark Lewis on April 13, 1994, serves as a guide to the first eight episodes of the original Twin Peaks. As someone who has just started watching the “Twin Peaks” revival, I found this HyperCard Stack quite interesting and, honestly, very helpful in understanding the background of the show.

While I was probably not the intended user when this Stack was create, I would think that people like me, fans of “Twin Peaks”, were most definitely the target audience. The show can often be quite confusing, so creating this type of HyperCard Stack proves to be very helpful in better understanding what is going on. The purpose of this stack was to chronologically categorize the series of events, identify each character, map out relationships between characters, summarize the first eight episodes and point out errors in production. Both a super fan and a newly interested viewer could benefit from this HyperCard Stack, providing baseline facts and insider scoop.

I found that the various character webs were particularly helpful in understanding the world of “Twin Peaks”. Each character is carefully connected to their counterparts. That being said, I found the ‘Invitation to Love’ HyperCard a little confusing, but perhaps that is because I don’t have a good base of knowledge about the original show.
The HyperCard Stack was very user-friendly and easy to use, utilizing simple text and helpful icons. I was particularly impressed with the “Twin Peaks” logo that appears when the deck is opened: the Stack was definitely created by a dedicated fan.

Finally, the “Oops” HyperCard was my personal favorite. As someone who loves to read the ‘secrets’ of popular TV Shows and Movies, this section was such a fun read. The little discrepancies that occur throughout the show are what make this HyperCard Stack feel particularly personal. Overall, great Stack devoted to “Twin Peaks”!

Uploaded by HyperCard Online on August 19, 2017